So basically what they’re going to be doing is I’m going to be digitalizing the money obviously most money in the world is digital anyway, but the blockchain is going to bring that next layer of Security around it more disability that kind of stuff and basically this is massive news of cryptocurrency as a whole guys.
This is massive and obviously, Bitcoin had that huge pump which we saw over the weekend 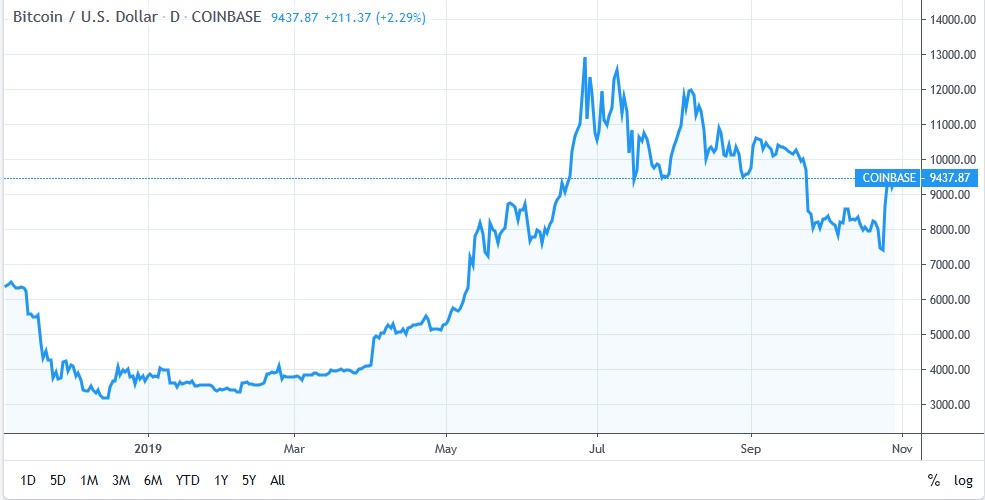 It moved on a four-hour candle more than it has over the over five years. So yeah, that was no even longer than actually so basically, it moved probably the most is ever moved in its exception except when it was like a dollar which you could you know, the end of the day that was so long ago now anyway, like we’re talking thousands upon I was $1 a move. It was a $3,200 move.

It was a crazy treating we can but this you know, obviously I think that I think that fundamentals don’t really know and Muse and fundamentals don’t really matter the price as much, you know, the fundamentals just kept getting better over 2018 for a bear market, but the price went down so they’re not really correlated but doesn’t the whole thing, but let’s dive into this because it’s really really interesting. So there are two ways you can look at it. It’s super positive of cryptocurrency, you know, China is like a big cat in the world America as well as Like China and America right now the big cat. China is kind of like, you know jumping forward trying to lead the way on this and what’s probably going to happen in my opinion is America’s going to have to follow suit as well.

And this is going to bring more money to more kind of certainty. It’s just more and more certain every day that blockchain and techno. This kind of technology is going to be the future which is going to mean investors will be more confident investing in the crypto World, which is subsequently will probably increase the price of things like Bitcoin, Ethereum, EOS. You name it all the other tokens will go up with it.

So the good part is this that’s gonna get more exposure. You know, the world is looking towards crypto now and China’s, you know, arguably going to be one of the biggest economies in the world. If not getting there. Now if America doesn’t catch up obviously, so this is kind of the good side is that there’s going to be a lot more people involved in cryptocurrency.

The bad side is this so you know saying it’s all good saying, you know, we want to be a blockchain leader great that kind of endorses like all the different projects. You have within your country may be like Neo will go up. But the issue is with this. They’re going to be using blockchain as a centralized coin for their already Fiat controlled currency. So it’s going to be an equivalent of you know, the digital version of what they already have which is the Chinese Yuan

Zai says it says here for a decade Chinese authorities have had plans to introduce their state-run digital currency. This is the first time we’ve of like kind of actually seen it in a coming out in the government.

It says is DCEP, one of the same time curbing the use of property launch digital currencies and cryptocurrency like so what they’re basically saying is the government are creating their cryptocurrency to get kind of like compete with the cryptocurrencies, which are more decentralized AKA kind of the Bitcoins., maybe Ethereum, Monero is that kind of thing. So in one respect is massively positive that this is coming out but you know looking at China, the way they do run their country that we were there in the country. Half is placed a half communist half capitalist is kind of in the middle right now.

It’s going to be interesting to see how it plays out because, you could see this technology has massive implications to free people but it also has massive religious to make people leave a more kind of maybe enslaved by the government, which we don’t really want to see like, you know, like most like prosperous countries don’t have like that much kind of like government intervention all the time.

The free I believe more in the free market kind of way, but it’s gonna be interesting how this plays out because you know if they come out with DCEP and it’s completely like, because at the moment in China, there’s so much control anyway over there people, so I heard a story, you cross the road and if you jaywalking they can take money straight out of your WeChat account and it was they also have the Monopoly on WeChat as well.

WeChat had to give all of its records to the government.

So it is like it says the Big Brother of China’s digital economy says, it’s like the big brother State it’s like, you know, we’re watching you and I think it could be very interesting to see how this plays out because I don’t have a People are gonna know what the people how they’re going to react to it. They have a different culture than America and the West.

So it’s going to see how it plays out. But overall, it’s like good and it’s bad. It’s good for the general cryptocurrency space in the west, but it might not be good for the Chinese, the Chinese people just going to be nice to see how it plays out. It says here they were kind of like Libra kind of push them in the right direction. So overall it’s with like cryptocurrencies coming guys blockchains coming. It’s a Step in the right direction. That’s probably why we did see such a huge overblow of Bitcoin valuation that the price went up so far, but this is just the beginning of this whole movement, every single country is going to end up do implement things like this into the future because a blockchain is just easier. It’s more accountable is more transparent.

It’s just better than what we have today.

We will look back at the system we have today and probably laugh just like how we look back at when you know, we were drawing going around a horse and cartwheel a flat Our God imagine that imagine living in those times. It’s gonna be the same thing. We’re going to look back at it. In 30 years and think cry can’t believe these Banks and all this paper money was circulating. It’s just it will just seem ridiculous.

So it’s a very very interesting big news story. it’s had a lot of implications on the crypto space